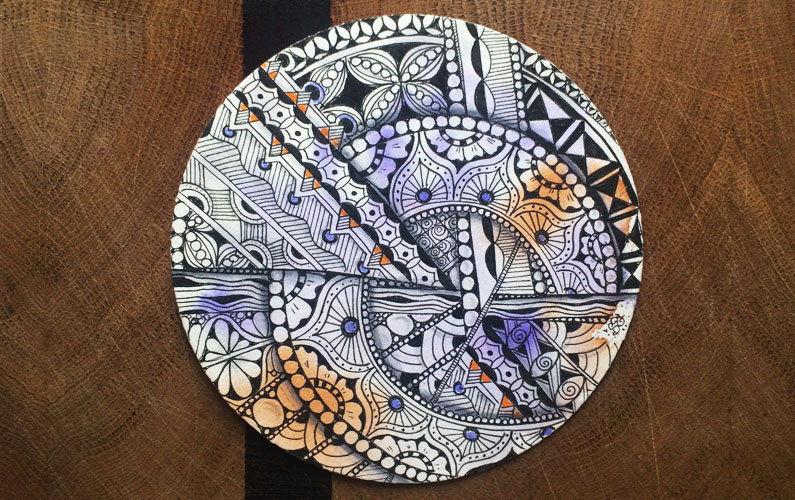 20/17 a gorgeous mosaic and stripes

this weeks challenge #316 – we were asked to create our string using stripes with varying widths, without having to be uniform or even! anything is possible as long as it’s stripes. I decided to tangle on a zendala which I colored with watercolors before I draw my strings. I had a great time tangeling those stripes and as you can see, there are lots of stripes, even stripes in stripes, I couldn’t stopp doing those lines:)

Last weekend I was invited to give two  Zentangle Basic Classes at a huge Festival at the Baltic Sea! It was a wonderful experience and there were so many ladies who wanted to take this classes. We had to get more and more tables in that room until there where no more space!

I had a great time and I guess everybody else had, too! The ladies were so creative, they tangled with me the basic patterns and couldn’t stopp enhancing them, with some ideas I gave them and lots of their own ideas. Actually the class was supposed to take 90 minutes, but because they had so many own ideas on their tangles we spend almost 3 hours tangling. That ist why I have not all tiles in my first mosaic, some ladies had to go pretty fast to dinner:)

The next day some ladies came back and took the class again:) That is why I made two different Basic classes. Friday Zentangle Basics “geometric”, whith static, rain, hollibaugh and cubine and on Staturday Basics “organic” with crescent moon, mysteria, bales and pokeroot. One funny thing that happend to me, on Friday’s geometric tangle class I planned so draw the “Z” string and for the organic class some rounded “e” string. Well, I was talking about string at my geometric class and -tada – I drew the “e” string I had planned for the organic class. So, when I told my students, that any string would work, I had to smile and somehow to sweat a little bit more. It is one thing to be unplanned at the kitchen table, than in a prepared class with 30 people. But I love those “oops” they really help to get more and more confindence in teaching!:) And the end of my class I certainly told the ladies about my  unplanned string, I think that is always a great chance to really show the attendees that it works! So thanks to all the creative ladies for that great time. Thanks for visiting my blog! And have a sunny sunday! 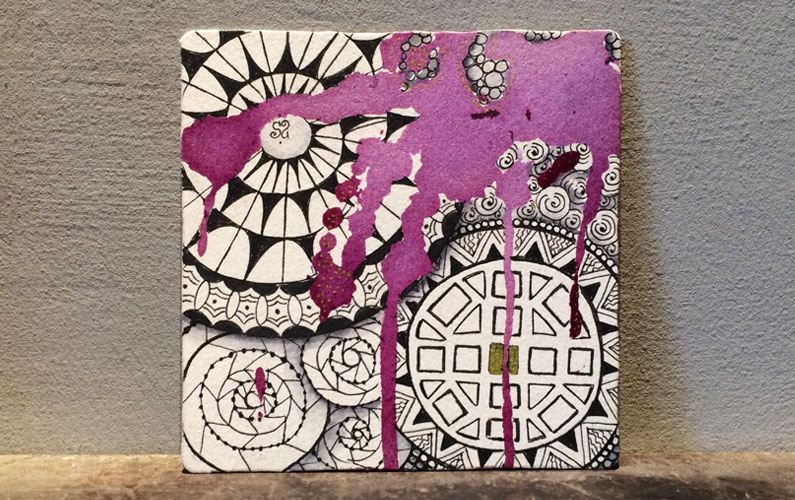 I can’t believe I skipped so many challenges this year, some of them I tangled but didn’t post them. 2017 seems to be more like an offline und unplugged year for me:)

But since it is really April weather today and I am not digging in the garden, I decided to share my tile I tangled yesterday evening. This week’s challenge # 312 is to spill, dripp, blott some liquid on the tile like coffee, tea, wine, watery paint or like I did pomegranate. I really love to spill something liquid on my tile and then tangle, it helps like a string, and it is always such a surprise. I used some juice of a pomegranate which I made some vinaigrette from for the salad yesterday. I love that rich color and I was really surprised how this deep red color turned into a more purple color after drying on the tile.

I started with the tangle “Vano” from Hanneke Sieben, which I tangled for the first time and definitely not for the last, and then I couldn’t stopp going in circles. I remember that actually don’t love tangling circles at all, but I guess that is something really special in tangling, for some reason things can change suddenly. So I am surprised with my tile but also happy:)

So I will tangle on now!

Thanks for stopping by and have a nice sunday 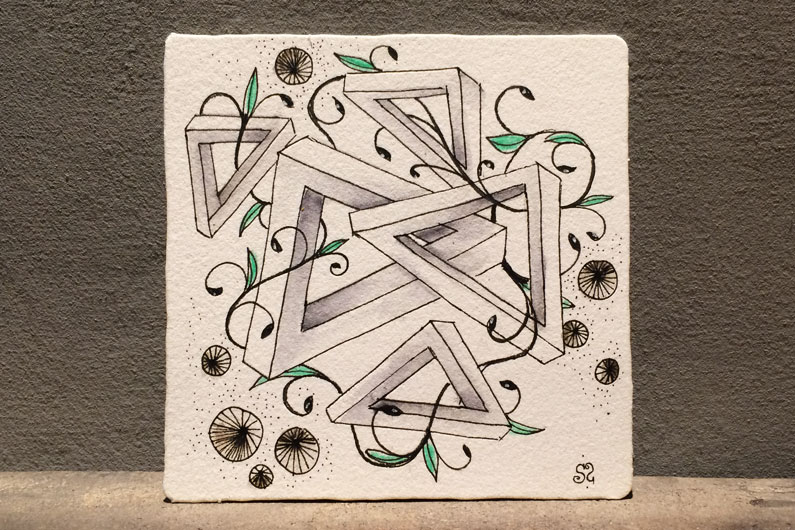 Todays challenge is to try an optical illusion in our Zentangle drawing. Those drawings that trick your brain in to thinking something impossible is real. This is actually pretty difficult, so I made it easier for myself and decided to draw the impossible triangle. Today I am pretty tired, so my tangles got a little bit wonky. 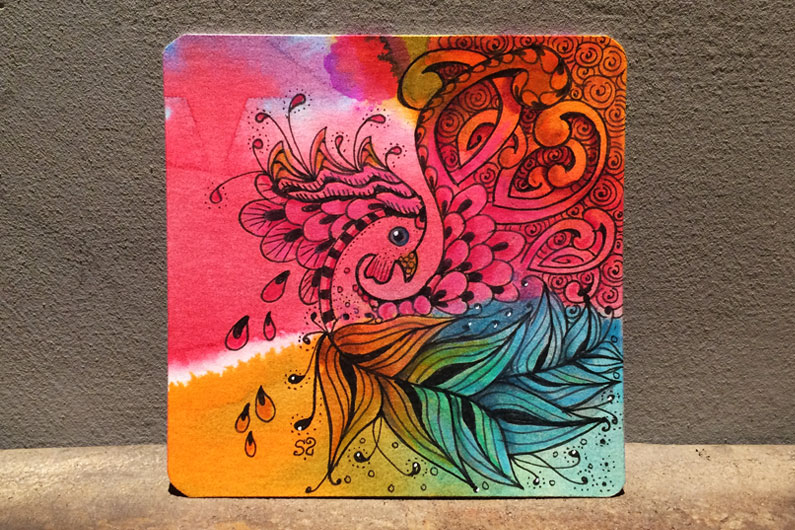 Zenuari day 28: Year of the Rooster

Today is the start of the Chinese New Year and this year is the year of the Rooster. For that reason the prompt today is to make it a good year  with a Zentangle drawing inspired by the year of the rooster. 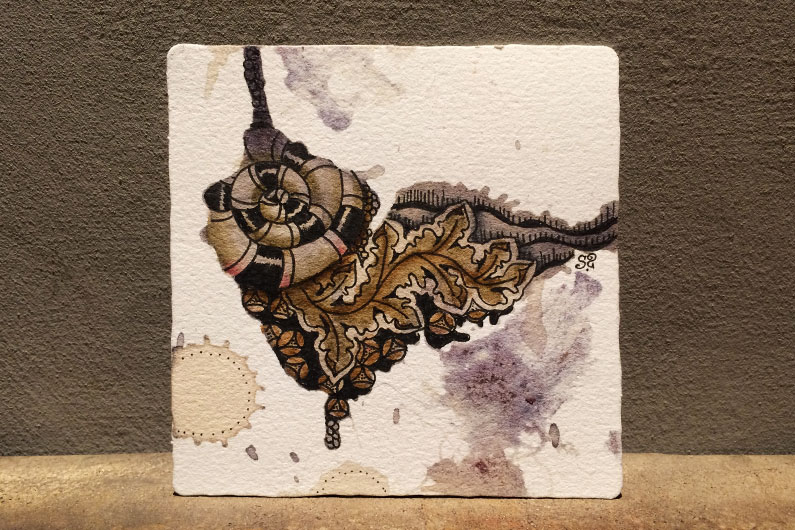 In a white room, with white curtains.

Today we are supposed to leave some white space in our Zentangle drawing. I love to do that. The first tiles I tangled had a lot of white space. I never filled the whole tile. By and by my tangle compositions got busier. I think  I am still trying out and  it depends on my mood. Today I used a tile which I had spilled on tea last year and decided to tangle only the stain and leave the rest of it white. And I really love it. I am still a supporter for white space:) 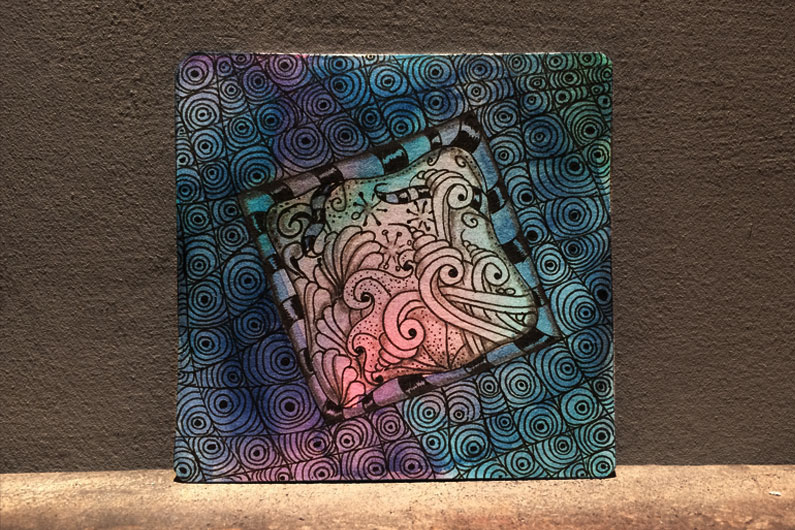 The Zentangle ceremony starts with making corner dots and a border. The border is drawn with a pencil, it is a guideline, you can use it and stay within or you just break the border. And because of the ever so lightly pencil stroke, the border gets invisible. It’s magic. But todays prompt is to make the border the star of the tile. So what can I say…I don’t like border 😉 But I tried. I used the tangle hypnotic for my border, and I used it the first time. Wow, I am actually not sure if it is called hypnotic because of its look or because you get hypnotized by drawing this tangle. It made me some kind of dizzy! But it is a fun tangle, I like it! Okay, not as a border, but in other contexts:) When I finished my tile, it looked so weird and “ugly” to me that I think I kinda like it. However I had a good time tangling, and that is what it is about, right?! 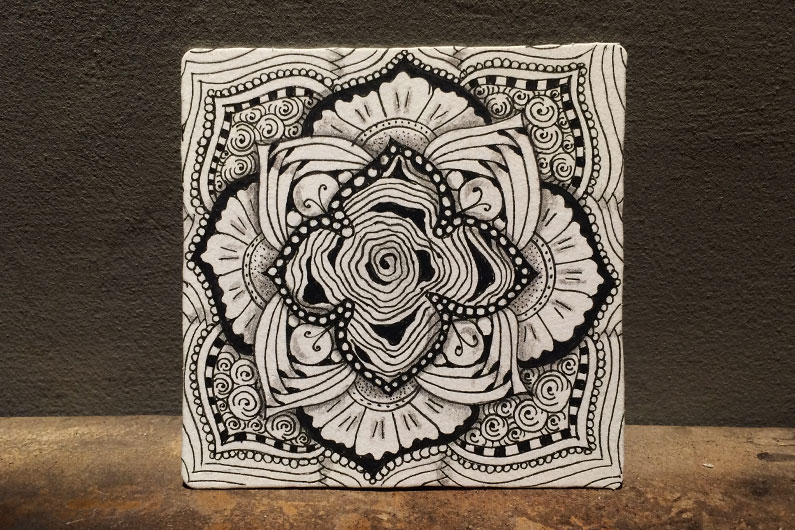 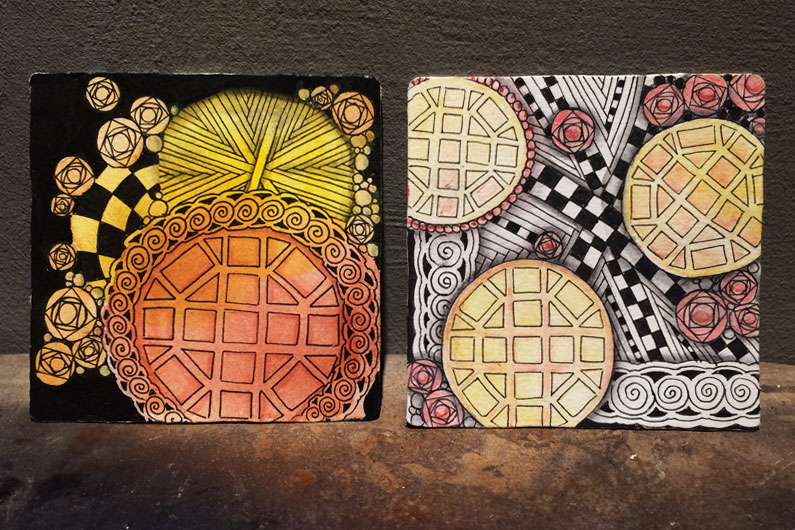 Remix: a piece of media which has been altered from its original state by adding, removing, and/or changing pieces of the item.

So todays challenge is to choose one Zentangle from the earlier days and remix it.

I decided to use the same tangles and change the composition, I choose one of my weekly diva challenge tile, the challenge # 277 was in July 2016 and is called “running round in circles”. Circles are for me most challenging, I have to remind that in Zentangle the circles are not supposed perfectly round. No perfectionism, please 🙂 Just be unperfect. letting go. Well, I try:) 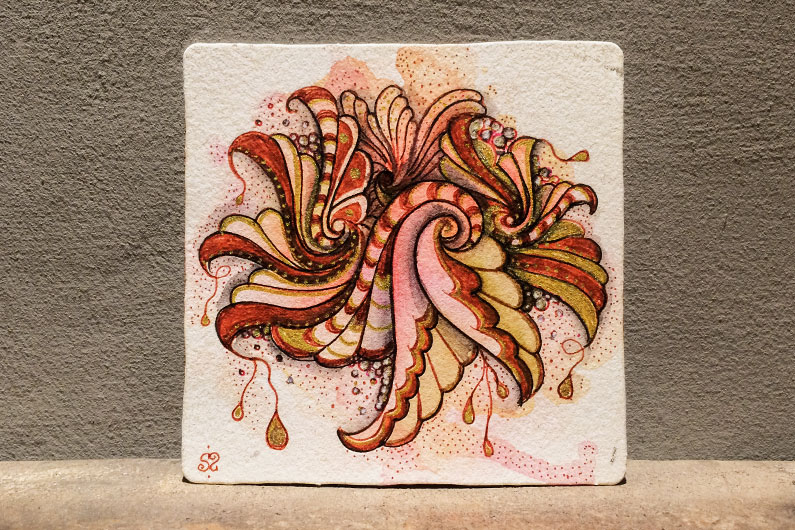 It’s the Hefty Hack – technique! Materials you need: watersoluble markers like Tombows, a brush and water and also a plastic bag.

Now scribble some color on the plastic bag. Wet parts of your paper with your brush and then place the bag on the water with the color faced down. The colors react with the water. Now the bag can be lifted up and you have your gorgeous watercolor background. Let it completely dry and then tangle.

I used the new Tangle “Drawings”, which was introduced at last years ZenAgain workshop, because on this weeks challenge #299 the Diva asked us to use the new official tangle “Drawings”. You can see the stepouts here.

So I combined the Zenuari’s prompt with the diva’s challenge. The weird thing, if I wouldn’t know that I tangled this, I would believe someone else did, it is totally not the style I am used to tangle and I am not sure if I like it:) But however – isn’t that that the awesome thing about Zentangle – you never no the outcome – and sometimes it really surprises me. Moreover, what will it look like to me in a couple of weeks or month? Isn’t that absolutely fantastic. 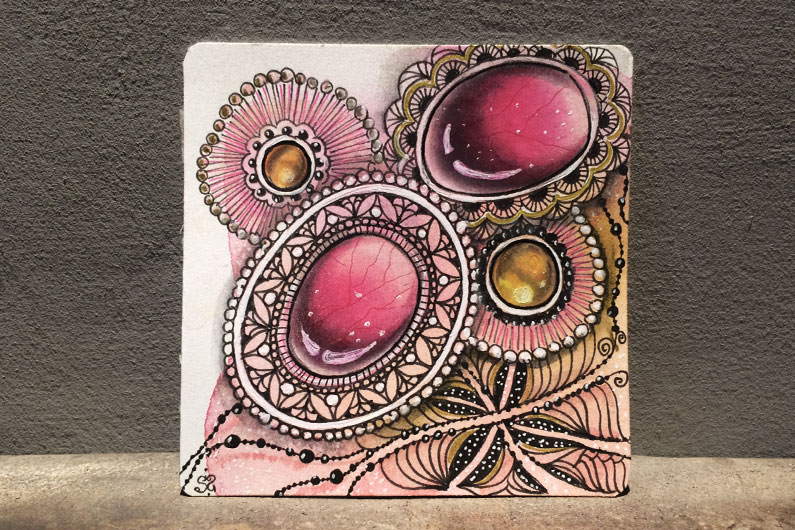 During last years  Zengems just popped up in Zentangle-land and they are still immensly popular. So today, we draw Gems. I now that a lot of Tangler love drawing those Zengems and they really look beautiful, but I have to admit, I didn’t had the need so far to draw gems. I guess I don’t want to think to much about light and shadow, which you really have to if those gems look realistic and shiny. But today I tried, and I think they do look like gems, but still, I am not a huge fan of drawing gems. I guess I will rather admire gems by other tanglers:) 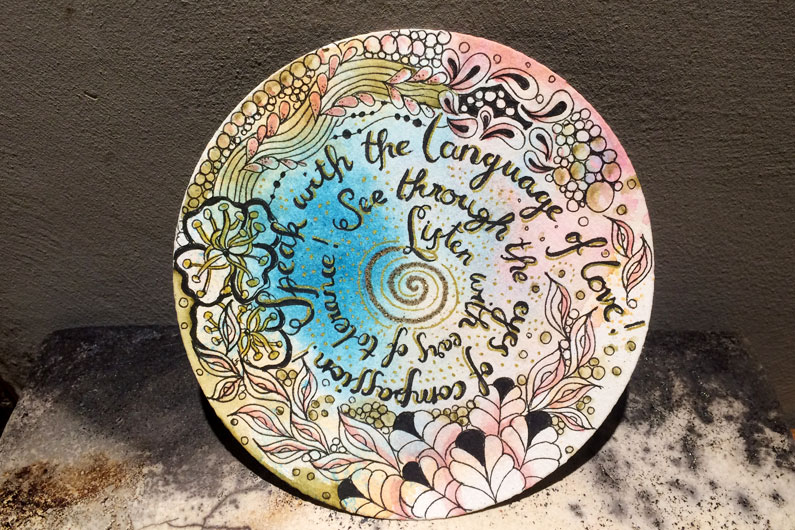 Handlettering,  is extremely popular at the moment. Handlettering goes very well in combination with Zentangle. So I chose a script-font and tried to reproduce by hand and combine it with Zentangle.  I used a Zendala tile, because I wanted the lettering to be like a spiral, which was pretty challenging. In the first Moment, I didn’f  know what to think about my finished Zendala, it seemed a little bit to crowded for my eyes, almost a little messy. But now I really love it!

Listen with ears of tolerance! See through the eyes of compassion! Speak with the language of love – Rumi 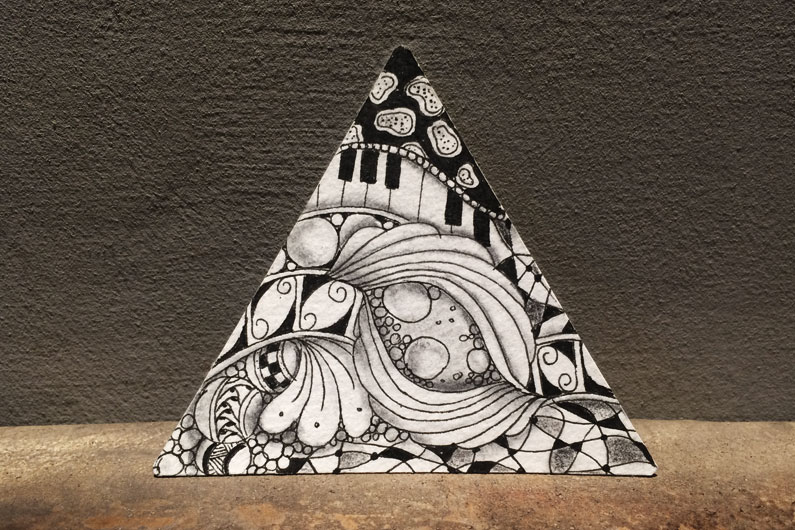 Brand-new is Zentangle inc.’s 3Z tiles, which they introduced at the ZenAgain Worskhop last year. So today’s prompt is to tangle away on a 3Z tile. Which is pretty good for my, because so far I didn’t try out the 3Z’s. Now I have a reason to tangle my first triangular tiles.  I just started in the middle and then I was in the flow. It is really great to tangle on those 3Z’s. 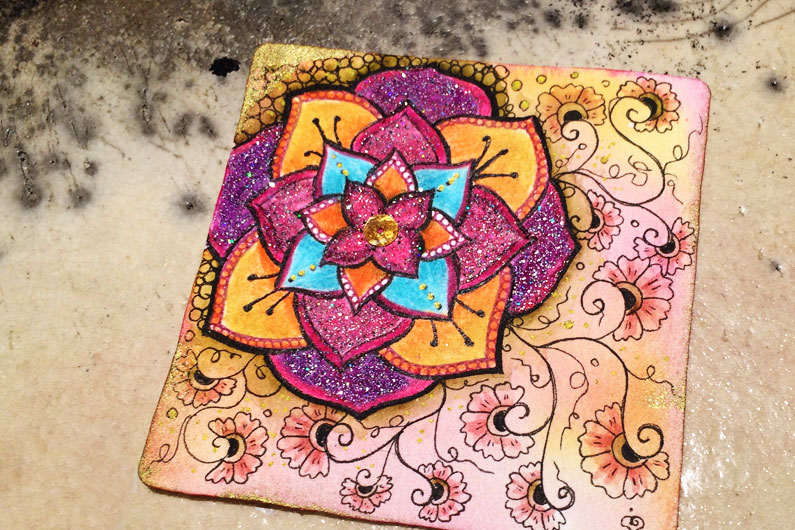 Today  it is about glitter and glamour. I used some embossing powder so make the tangle Cyme sparkle. Well, not only my tangle sparkles, but my hands, my face, the dogs…actually everything I touched after adding glitter to my tangle. I love glitter… I am a princess now 😉 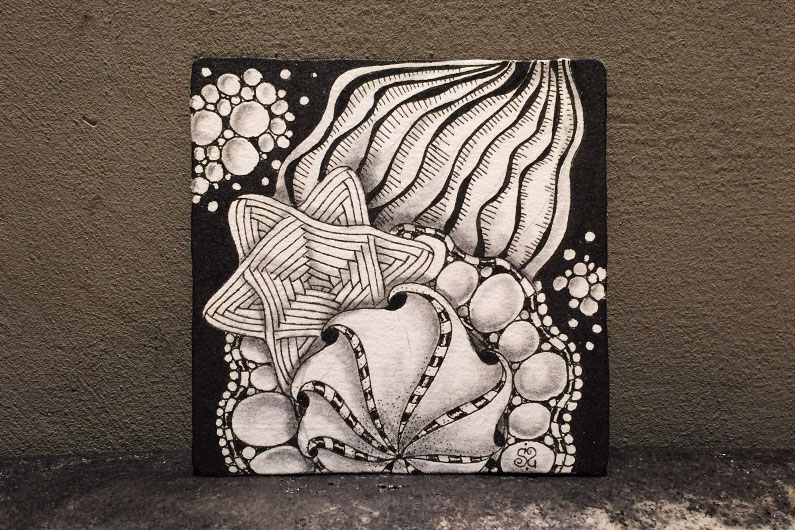 Todays prompt is to first to find some stuff around the house and arrange it on the tile. Than trace the shapes with pencil onto the tile and so we have the string! And tangle! I gathered my stuff in the kitchen. A piece from my “kitchen aid”, a spaghetti-fork, a cookie-cutter in starshape und the handle of a fork. So I got an interessting string:)

Today I had a really peaceful and calming tangle evening, enjoying every deliberate stroke and I really went out of my comfort zone and passed the border! Meaning I stuck with the “elegance of limit” and just ignored the “border” of the string.

here you can see  my string, you probably can see where I passed the border and where I stayed with the string! I made a wonderful experience tonight with that tile! 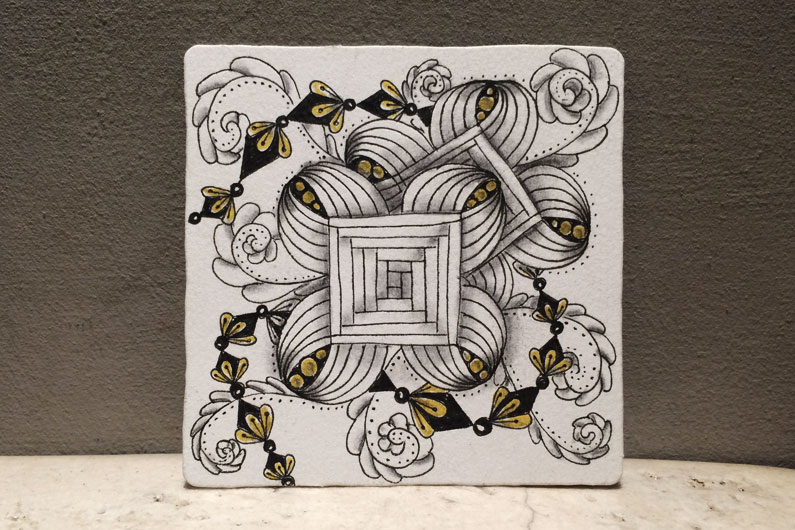 Todays challenge is to create a tile with tangles that are new to me.

So I tried for the first time “Loop” by Amelie Liao, CZT, “Diamond Drops” by Janice Sherlock and “Fricle” by Julie Evans, CZT. And if you look a little bit closer, you can see were I wasn’t concentrated drawing “Loop” 😉 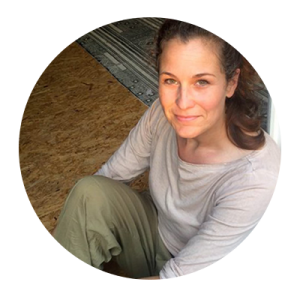